SHEELIN END OF TROUT SEASON: Lough Sheelin closed for all angling on October 12th and some huge trout were caught by anglers out and about on Sheelin before this. Unfortunately their huge fundraising end of season competition was cancelled – but quite a few anglers still fished the last few days of the season. Kevin Coyne was a regular angler on Sheelin and did well in 2020 on the lakes, catching quality fish on flies he tied himself. Another angler who was in fine form on Sheelin was Oliver McCormack and his pal Pat Sweeney. The deadly duo boated and released some exceptionally big trout; including this 6lbs 2oz caught on the last weekend of the season by Oliver. I had a great chat with Oliver last Sunday morning online and he told me that himself and Pat had 3 super fish that day and lost a few more good trout. I hope to meet up with Oliver come the 2021 trout season.

OWEL END OF TROUT SEASON:  I was on Owel for the last day of the trout season and caught some nice fish on the troll. Also out on Owel that day were local anglers Charlie Greville and John Dooner and they boated 4 nice fish on the last day of the season. A lot of fish were being caught well out from Portloman in deep water but the few fish I was catching were only in 12-15ft of water and my lures were no more that a 12inches under the water surface. My younger brother J.J. and his son Cathal were also out on Owel that day. Naturally Cathal has fishing running through his veins, being a Flanagan, but he is also regarded as one of our top young hurlers and footballers coming on line. Cathal and J.J. boated 3 fish on the last weekend, one well over the 2lbs mark.

PENROSE BACK FISHING. I was chatting to David Penrose who is originally from Ballnacarrigy and now living in Mullingar. David took some time out from angling, but is back at it and fired up for the coming winter pike season. David is no stranger to landing big pike and last August had a savage looking pike from a local Midland lake. It rattled the scales at an incredible 27lbs but David had no measurement board or tape – it certainly looks well over the magical 100cm though. Great to hear you are back at the angling David and keep us posted on your winter angling adventures.

POWELL FROM KINNEGAD: Young 16 year old Stephen Powell is certainly making waves in the angling world lately. Stephen had a super pike recently with his angling pal Kevin Coyne. It’s a beautiful looking pike and it looks like I have some serious competition on the fishy photograph scene. Great shot Kevin Coyne.

THAT’S IT: As mentioned above, we have quite a collection of super photographs this week of anglers and their prized catches. I also got news from John Bawle regarding people seeking grants from I.F.I. to encourage young anglers to take up the wonderful sport of fishing. The oars are in motion and application forms have gone. All going well we will see young anglers out and about on the Royal Canal by summer 2021. Tight Lines until next week and as they say – stay safe 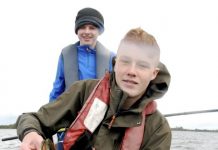