There was a few hard nights frost last week, as you are well aware and the water temperatures dropped very fast. Derravaragh has dropped a little and the river Inny is in good shape, but catching fish proved quite tough. Ennell did produce a few small pike and perch last weekend, but it was bitter cold jigging for the perch. Lough Glore produced a few nice pike last Sunday during the annual Christmas Pike competition. The Boyle lads from Scurlogstown, Collinstown were untouchable boating up on 5pike including the winner just over 10lbs.The town stretch of the Royal Canal has dropped quite a bit in recent days, and plenty of fish are visible along the town stretch. Also this week news in on the opening of the Salmon season which kicks off on January 1st. Plus a bit of shooting news this week, as Rhode Gun Club prepare for a 30 Bird shoot on Sunday December 28th.

INNY DUMPING. I was back on the River Inny last week, and also done a few hours on Derravaragh.The fishing was tough to say the least and we only had one small pike for the days fishing. Unfortunally as we made our way up towards Coolnagun Bridge, we came across quite a few bags of rubbish. It’s quite clear those dumping this rubbish, just pulled up on the Bridge and dropped the bags into the river. Its an on going problem across our waterways, and will have to be tackled in 2015.

CHECK OUT ENNELL OVER CHRISTMAS BREAK. Lough Ennell is really becoming a banker to catch a fish as water temperatures drop to near freezing. Last Saturday was the first time this year I broke ice to venture out. Only a light covering in sheltered Bays, but I am sure we will have more frost in the coming weeks. Working small rubber Lures and Jigs we hooked up with 5 small pike, and some nice perch. Ennell is worth checking out over the Christmas break, but wrap up well as it a lot colder on the waterways than on dry land. All pics from Ennell on my Angling site later this week.

GLORY DAY FOR BOYLE LADS. Last Sunday December 14th Lough Glore Anglers hosted their annual Christmas Pike Competition. Conditions were very changeable with a harsh cold wind, and some ice cold showers hammering down on compeditors. Not to worry we anglers are a hardy bunch, and took what the weather gods gave us on the chin. The competition was fished from 10am-3pm and it was all legal methods, heaviest pike down the line for prizes. Also up for grabs was the Angler of the year prize, plus prize for heaviest pike caught during the 2014 competitions. It proved a to be a good days fishing on Glore with up on 10 pike being boated. Top Rod was David Boyle from Scurlogstown, Collinstown with a pike of 10lbs 2oz.Marty Smith from England finished 2nd with 4lbs, 3rd David Boyle “Junior” 3lbs 8oz, 4th Mick Flanagan, 5th Pat Finglus of Castlepollard, and 6th Joe Murray of Mullingar.Pat Daly of Collinstown and Paddy O, Brien of Rathrone Co.Meath were joint winners of the Angler Of The year. Young Christopher Gray of Dalton Park Mullingar had the heaviest pike during the 2014 season, but unfortunally was not available for the presentation. Christopher’s dad P.J. accepted the prize on his behalf from Glore Chairman Eddie O, Donnell.Presentation took place on the lake Shore and Eddie O, Donnell thanked all who supported the competition during the season, and also the Glore ladies for putting on a great spread of finger food after the Christmas Pike competition.

SALMON SEASON COMING ON LINE. Salmon anglers are gearing up for opening day, which is January 1st 2015. The River Drowes over the years has proved a Hot Spot for Midland salmon anglers, and you will be glad to know the prices for day permit remains the same as last season. It will cost you 25 Euro for a day permit, and 300 Euro for a seasonal permit. The Drowes opens for fishing on New Years day at 8-30am.More on this give Drowes Fishery manager Shane Gallagher a bell on 087-8050806.

ROD & GUN. Like many of my angling pals I also love the shooting game. News has filtered in of a 30 Bird Sporting Clay Pigeon shoot taking place on Sunday December 28th .The shoot will be hosted by Rhode Game Club and it’s a 11am start. There will also be a 10 bird down the line shoot, taking place on the day. We are told once you get to Rhode Village the shooting grounds will be well signposted. Fancy a shot give Rhode Gun Club Secretary David Duffy a bell on 087-8244993.Or Treasure John Jones @ 087-9120367.

THAT’S IT. The Royal Canal is dropping fast, and I have noticed a few fish on the move. If the Lakes are a bit chilly for you over the Christmas break, give the Royal Canal a spin. I will not have room for all the Lough Glore presentation photographs this week but will cast back in the New Year. Tight Lines and have a very Merry Christmas.

ANGLERS BACK ON THE WATERWAYS 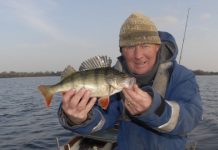